First off, let me apologize for my absence.  I’ve been in the middle of a move and oral surgery, so cooking, let alone blogging, have been far from my mind the past three weeks.

But the good news is, I’m back and ready to share a couple new recipes and experiences with you all!

I’ve been extremely bored with the food I cook lately, so I decided to shake things up and cook a recipe that had a lot of components, and a lot of work to it.  Fine Cooking, my favorite food magazine not just for the recipes in it, but for the techniques it teaches you, had a recipe for Margarita-Marinated Skirt Steak with  Grilled Tomatillo Salsa in their July 2009 issue that both sounded and looked good (pictures ALWAYS entice me to cook something, which is why I need to really step it up and start taking pictures of my own food and posting them here.  Hopefully that will encourage you all more to cook them).

I had never cooked tomatillos before, but I was ready for the challenge.  Tomatillos are called green tomatoes in Mexico, and are part of the same family as tomatoes.  However they’re much smaller and much more acidic.

I also had no Cointreau on hand, or Triple Sec, so I used the juice of a fresh Valencia orange, although you do need to be careful when using citrus in a marinade.  The citric acid can actually start cooking the meat if it’s left in the marinade too long (Ceviche method).

Tomatillos can be extremely bitter, so it’s best to boil or grill them before using, to mellow out the flavor.  And, IMHO, any fruit or veggie is great grilled.  The recipe instructed me to grill the tomatillos (after peeling and washing them.  They’re somewhat like garlic, with a thin, papery skin that leaves a sticky residue on the fruit and your hands) til they had grill marks and were almost falling apart.  I did as told, but found when it came time to dice them up for the salsa, they were a bit too soft to get a nice dice.  Next time, I would grill them for a little less.  I realize this might alter their flavor, but I don’t mind a strong citrus essence.

The marinade was awesome–I will definitely use again, both on skirt steak (which is tougher and needs a marinade in order to be tender and savory) and even chicken.  Alcohol-based marinades always come out good, I’ve never met one I didn’t like 😀

If you’re feeling ambitious, and hungry for some great summer-time grill food, try out the recipe by clicking the link above.  It looks intimidating, but you will not be disappointed!  I can’t wait to use tomatillos again.  They’re color is just so amazing! 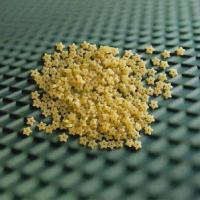