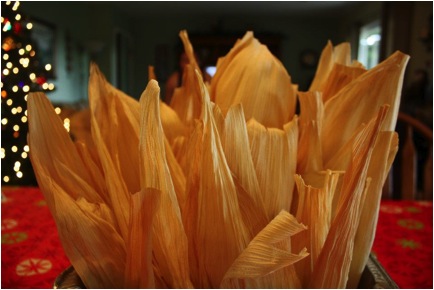 I asked my SO’s sister, Brynn, to write today’s blog post. She and her fiance’s mom and sister whipped up a couple (um…A LOT) of tamales last weekend for a traditional Mexican Christmas. I was jealous of the ordeal and never made it over to help out with the assembling, but I did manage to snatch up some of the tasty tamales.

This whole process is amazing and hopefully one day I’ll learn to make them myself. Here’s Brynn’s account of the tamale-making (she’s got way cool pictures). Enjoy and have a GREAT Christmas Eve:

This Christmas was the first time in five years that I was finally able to learn the art of tamale making from Kevin’s mother, who is now my future mother-in-law. As this is the last Christmas before I will marry into this family, I was basically obligated to learn how to make this traditional Christmas meal in order to ensure a healthy and happy marriage. And because Melissa requested that I be a mole (not to be confused with molé), I forced myself to focus and take notes.

When I arrived, Kevin’s mom, Michelle, had already begun preparing the hojas (corn husks) by soaking them in water and letting them air dry in a colander. While they were drying, Michelle and her friend Pat prepared the meat fillings.

Pat began to heat her chicken in molé sauce, while Michelle prepared the molé that she would use to flavor her shredded beef. They explained that there is no standard sauce for the meat, but each family has their own preference. For example, Michelle’s began with a two large cans of Las Palmas Red Chili Sauce, to which she added cayenne pepper, granulated garlic powder, salt and other spices. After the sauce was warmed and the seasonings incorporated, about five pounds of pre-cooked shredded beef were stirred in. 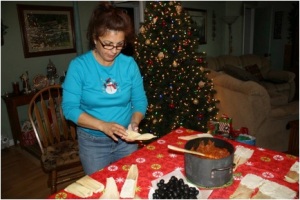 Traditionally, tamales can be filled with just about anything, ranging from meat like chicken, beef, or pork, to vegetarian options like potatoes, green chili and cheese, or even strawberries and sugar.

According to Kevin’s dad, one of his co-workers brought him sugar-filled, Jello-flavored tamales. Apparently, the guy was super proud of himself for mixing the green powder in with the masa.  What creativity, what genius! (Personally, I would stay away from this variety).

After the fillings were ready (pots of chicken and beef, cubes of pepper jack cheese, strips of green chilis, and a huge bowl of black olives), it was time to spread the “masa on the hojas”.  The masa is corn flour dough that surrounds the fillings and creates the little pouch of goodness. Basically, it is corn flour, salt and water, whipped until fluffy and spreadable. More traditionally, the masa also includes lard, or manteca. This gives the dough more flavor (as fat usually does….that sneaky little ingredient), but also makes it a lot more, well, fatty. Duh. The masa can be prepared at home, but when roughly 45 pounds of this dough is needed, you will be pleased to know that many Mexican markets and restaurants sell this dough for anywhere from 80 cents to $1.20 per pound.

We took the hojas, found the “smooth side”, took a glob of the masa, and spread it on the wider half of the husk. The goal is to get a nice even coat, about a quarter to half of a centimeter thick. I think I pretty much nailed this part.

In an assembly-like fashion, the husks were filled with a spoonful of meat (plus an olive for a bite of saltiness!), a chili and slice of cheese, or chicken and cheese. Pat even added a spoonful of creamed corn to her chili and cheese tamales. Then the tamales were folded, and because the husks were of various sizes, sometimes a second husk was added for extra protection.

The final step was wrapping the tamales in food paper. Michelle explained that while this was not necessary, it prevented the tamales from dripping on each other while cooking. 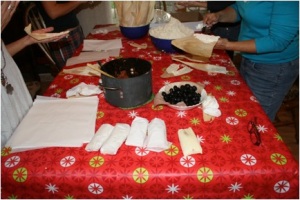 The most mysterious part of the process to me was always how the tamales were cooked. Baked? Broiled? Fried? Seriously, I had no idea. Turns out these little puppies are steamed. Yes, steamed.

Ten to 15 tamales are layered in a large pot and steamed for about two hours. However, depending on the quantity of tamales being made, the majority are stored in bags and frozen raw. (Add another 30 minutes to an hour for steaming frozen tamales).

Overall, we made 20 dozen tamales.

That’s 240 tamales, people! And I was probably responsible for consuming at least ten in the course of just two days. And it would probably have been a lot more if it weren’t for the shreds of dignity and self-control that I was holding onto.

If you want to learn how to make tamales, my best advice would be to get engaged to a Mexican. Kidding! But honestly, you will only really learn by watching and helping a more experienced tamale-maker. Keep your eyes and ears open for any friends that make tamales and offer them a hand!  If they make anywhere near as many as Kev’s family, they will probably appreciate the help. 🙂

Psst: Check out Brynn’s blog here, which is chock full of humor, math, travel and food; and thank you to the math master for guest blogging for me!

2 thoughts on “Free For All Friday: Guest Blog: Christmas Tamales” 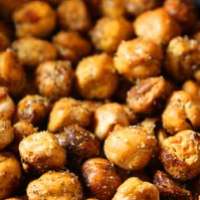 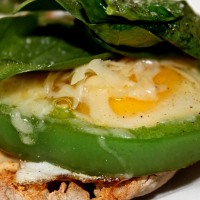